It's that time of year when one takes inventory of accomplishments made in the past year or makes lists of what they hope to get done in the next year.  About a month ago I made a list of what  I hope to still get done this year. Let's see how I did. 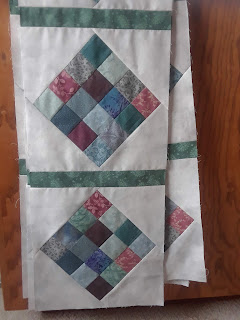 I thought I might finish 2 more tops this year. This 16-patch quilt I'd just started. It'll get done if I can find a border for it.

I finished finished the applique quilt. That means it's bound too.

Three of the six quilts that needed borders are now done. I found the fourth, now there is no excuse.

I have reached the middle of the quilt I've got loaded downstairs. I'll still aim to finish that soon and maybe get another comfort quilt done before New Years. I thought I might be able to get 4 more quilted but I'm doing a custom job on it and the last and that slows me down. The next few are decided and the backs are ready. 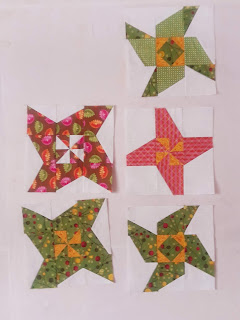 I opened a bag of scraps stuffed in a drawer and found these blocks. I remember them but didn't remember they were in the bag. The blocks all use Onlies units from my Thirtysomething Block book.  So I've cut more to make a small quilt. I was just using up the fabric and so will have a  pinwheel sampler. I haven't thought as far as sashing yet. It is small so there is a good chance I can get it done by New Years.
There are a few other assorted piles for new quilts from that bag. And a few piles of fabric pulled for a few other quilts stacked on my table or piled on the floor. I need to tweak those selections before I start cutting. I like revisiting them weeks later. Seeing them with fresh eyes always helps me decide. Sometimes I can look at a pile and it all goes back in the drawer. It's not always the fabrics I chose but sometimes I decide against doing the design I had in mind. No time now. 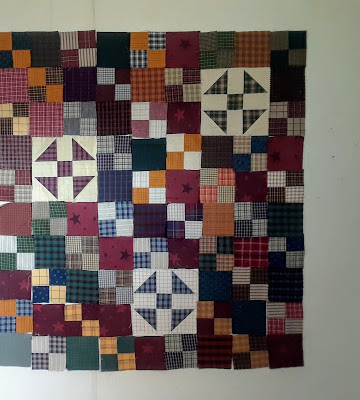 At Studio 3 I have several projects going, too. I bet you could have guessed. The one that has gotten the most attention lately is the homespun plaids. I thought I'd get this one done soon but it's taking longer than I thought. I'll be making it a little bigger than this, just enough to use up a small pile of scraps. I have a few ideas about using more of the plaids. I do like the plaid shoo-fly blocks, so I will be thinking of that as an option.
I am having a hard time remembering Christmas will be here soon and there are things I must do to be ready. Cause really, I'd rather quilt! Can you tell?

Posted by Gayle Bong at 9:54 PM No comments:

I've been dabbling at quite a few different quilts in the last week or two.
I added borders to a few of the tops waiting. I updated the picture of the pinwheels with the green border added. I still have 2 big quilts that are waiting for their borders. Maybe by the end of the year. 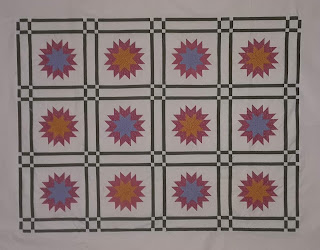 I think this is a radiant star variation. I finished this one earlier this fall. I left it at Studio 3 and finally remembered to bring it home. I didn't have a definite plan for this one and I am happy enough with how it turned out. My original plan was to make a summer quilt. But with all the piecing in the stars, I don't think it is a good candidate for that. So to find the thinnest batting I can find. That may just be a layer of cotton flannel. I might add a flat green piping before a muslin binding but that will be determined after quilting in the year 20??. 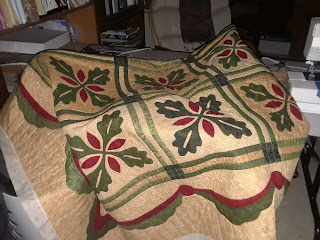 I finished the quilting on the qpplique quilt. I did a bunch of quilting in the ditch on my pfaff upstairs. I have a hard time doing a good job of that on the long arm and I do like what it adds to some quilts. I'll start work on the binding at Studio 3 this afternoon. I am going to plan to use this one. That is as opposed to just displaying it. It's nice to be able to say I actually hand appliqued a quilt. I think it's my first!

Lisa was over the other day to finish cutting the blocks needed to enlarge the Broken Dishes quilt she chose. She did a fabulous job cutting. She hasn't worked with me in the sewing room in 20 years. She never did very much back then either. It was nice to share that with her. I'll do most of the sewing now to finish it but she may be interested in doing some. She liked the idea that it was a quilt we worked on together. 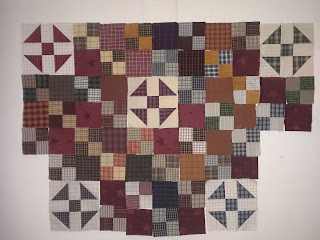 At Studio 3 I started work on a quilt using plaids. I've collected them for a good long while and when a bag of plaid scraps was turned in at church I just could resist no longer. Yet I couldn't decide what I wanted to do with them. The homespuns are a little thicker so I didn't want to many bulky triangle points coming together. So I chose 4 patches with a few Shoo Fly blocks mixed in. Still wasn't sure I'd like it so I only cut some. Yesterday after playing on the wall I could see it would be fine as long as I didn't use the busy plaids. Those are the ones with lots of light and dark colors in it. It's busy enough. Next I need to decide how much bigger I want to go. I have a bag fulllll of plaids.I like to mix in a few regular prints too. Just to relieve the business of the plaids. I hope to return to the ufo's in the closet soon.

Upstairs here at home I opened a box on the shelf that I thought was part 2 of a 2 box kit. I was wrong. I think I simply put the fabrics together cause they didn't go with anything else in my stash. I had no plans for these but before you know it I settled on 16 patch block. Hmmmm. What next? I thought of using them in the center of stars, but since I cut 2 1/2" strips that would make pretty large stars so I decided to frame them with triangles in a light gray then sash them.We will see how they like that treatment soon.
Yeah, One quilt at a time is just not my style. 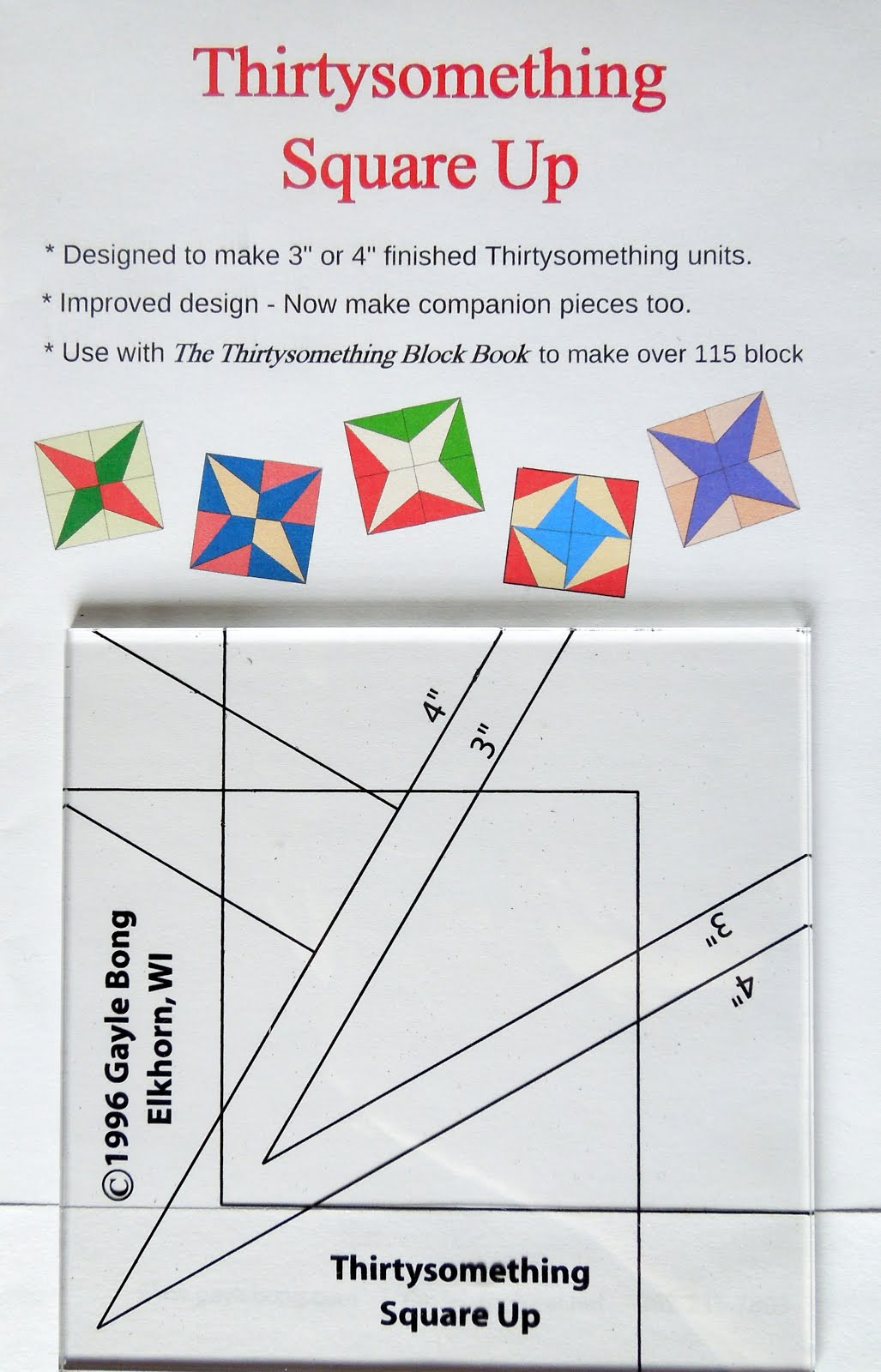 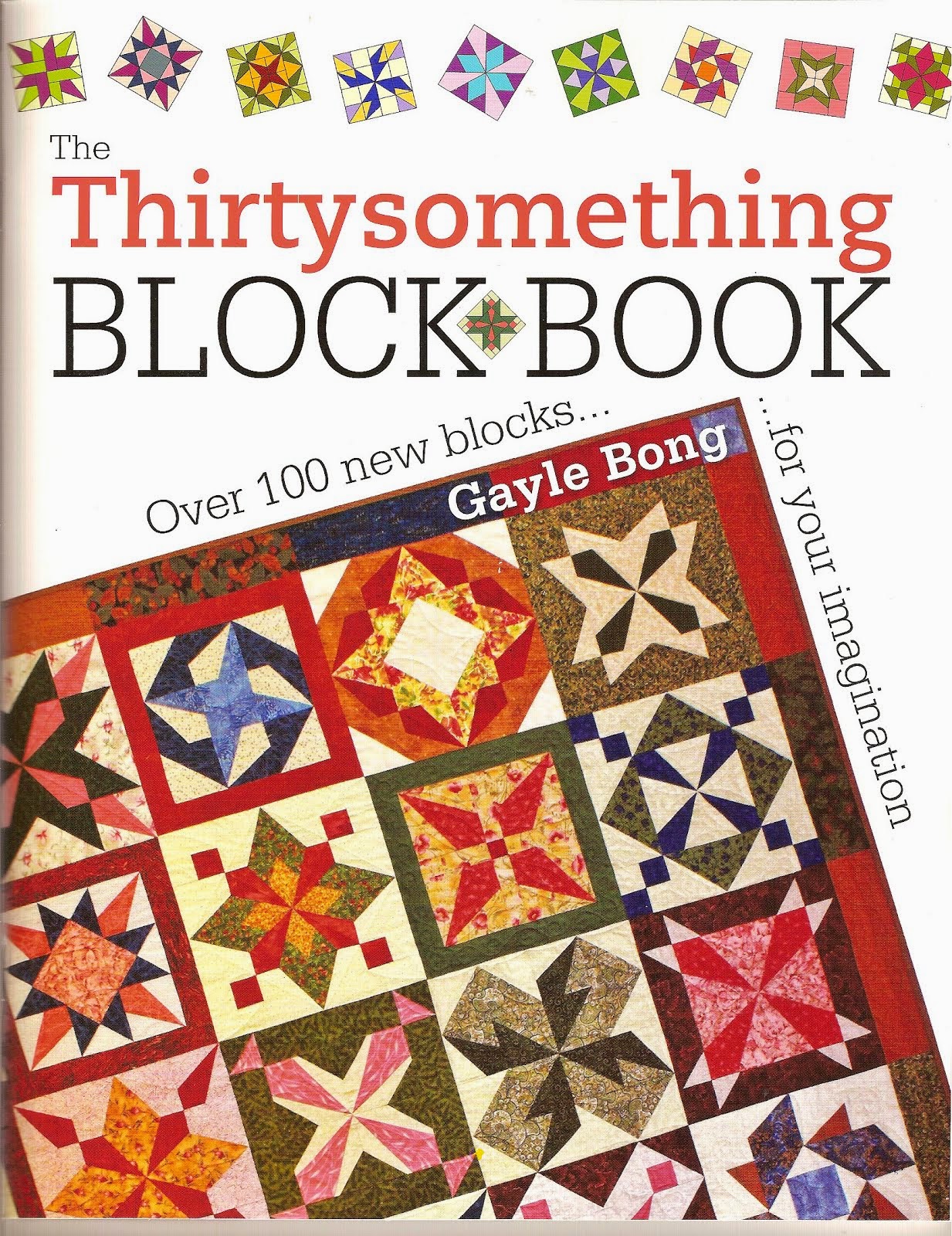